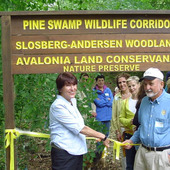 The members, staff, and board of directors of the Avalonia Land Conservancy were saddened to learn of the passing of Paul Slosberg on March 11, 2018, at Hospice House, Lecanto, Florida, after fighting a courageous battle with cancer. Paul was a generous land donor to Avalonia.

In 2003, Paul became a Life member of Avalonia when he donated 79 acres of his family’s land in Ledyard toward the creation of the Pine Swamp Wildlife Corridor, a 321-acre, multi-property acquisition. The Corridor was one of Avalonia’s most complex but successful projects. His property comprised a central part of that acquisition along with donations made by two other land owners and the Town of Ledyard.  Funds were raised to purchase even more of the surrounding land from the Slosberg’s at the same time. Today, the entire preserve is surrounded by land zoned R-40 for housing.

The Pine Swamp was originally dominated by Atlantic white cedar trees, which can grow from 65 up to 115 feet tall, 2.5 to 6 feet in diameter, and live from 200 to 1000 years. Although most of these majestic trees were removed for ship masts several hundred years ago, some do remain in the swamp. Once a common component of peat swamps in southeastern Connecticut, there are precious few stands of these trees that remain.  Paul’s donation was central to the successful conservation of this unique habitat.

We would like to extend our deepest sympathy to Paul’s family for their loss and thank them once again for their generous contributions toward the conservation of southeastern Connecticut’s natural resources. For more information on Paul, click HERE.

Photo caption:  Paul Slosberg, right, is congratulated at the ribbon-cutting ceremony the day of the opening of Avalonia’s Pine Swamp Corridor. Paul donated 79 of the 321 acres preserved in 2003.