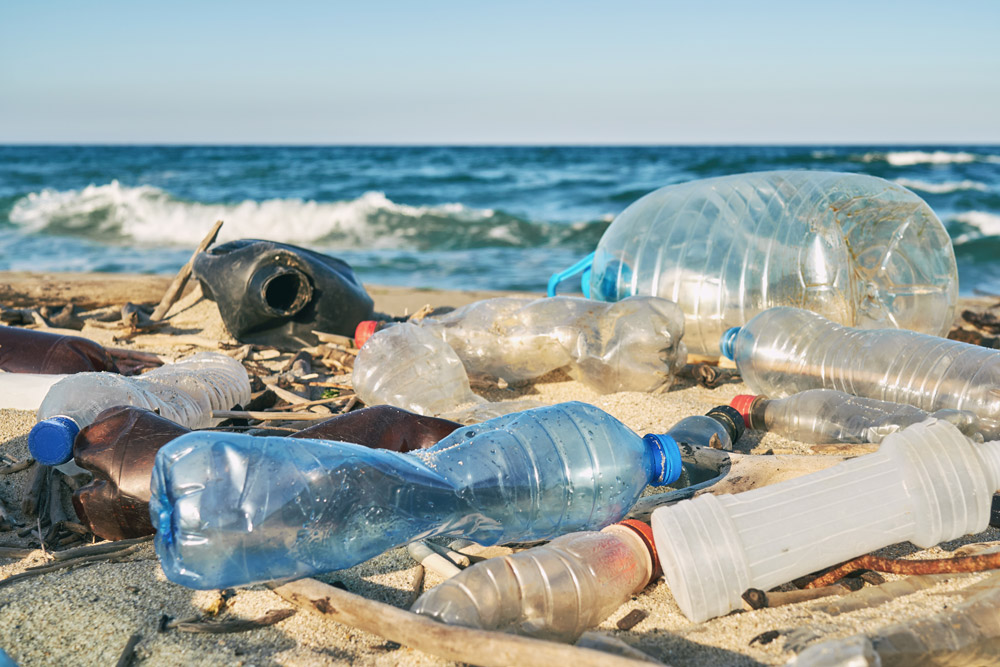 I was picking up trash along Miller Rd and the northern part of Shewville Rd during the Town Cleanup Day, and noticed that most of it was plastic.  This is, of course, because plastics, in all their many forms, are nearly perfect for making containers: they are lightweight, resistant to breakage, can be colored or clear, can easily be formed into many different shapes and thicknesses, and they are durable (yeah, we’ll come back to that). Because of all of these great qualities, plastics have become ubiquitous in our culture; it’s not possible to look around in a building or home (or a roadside) and not see something which is made from or which includes plastic.

By itself, that’s not an inherently bad thing.  But another quality is that plastic is generally cheap, which makes it easy to discard. And humans have a pretty mixed record of keeping track of their waste…it tends to escape and get everywhere.  And this doesn’t even mention that fact that so much of our roadside trash is intentionally thrown out a car window by people who just don’t care.

So what happens to plastics in the environment?  They are broken down by the oxygen in the air and UV light from the sun. But they’re not broken down to their constituent chemical parts; they don’t go back to the plastic monomers and other chemical building blocks.  They become smaller and smaller pieces of actual plastic. When they get to be about the size of a sesame seed (smaller than a few millimeters), they are termed “microplastics”.  Much of the microplastics are estimated to come from textiles, tires, and “city dust”, while the rest comes from marine debris (fishing nets or lines floating in the ocean) and from consumer plastics which have escaped the waste stream.  So all those plastic containers along the roads were on their way to becoming microplastics and washing down into the Thames and then the Sound.

These microplastics are just as durable as the larger pieces, and have become ubiquitous in our environment. They are even in our food supply. According to a 2020 study in the Journal of Food Science and Technology, microplastics have been found in mineral waters, beer, canned food, honey, and sugar. That means we are consuming these tiny pieces of plastics.  Indeed, microplastics have been found deep in human lungs (remember the “city dust”??…yes, we’re breathing that), as well as in human blood, feces, and placentas.

Plastics can have two possible adverse mechanisms of action: physical, or chemical.  The physical problems tend to show up with the larger pieces of plastic. These larger pieces that float in the ocean are often mistaken as food, and are ingested by various fish and small marine animals. The immediate problem this causes is that these pieces of plastic tend to clog up the digestive system, not passing through, and leaving less room for real food, so the animal slowly starves and dies with a stomach full of plastic. The smaller pieces of plastic are found in smaller animals, but the “clogging and displacement” effects seem to be less pronounced.

Nevertheless, microplastics are found everywhere in the oceans, and have been found in all “7 seas”.  And because microplastics are consumed by hundreds of species of small marine animals (algae, plankton, every filter feeder like shrimp and clams and mussels and blue whales and whale sharks) who are then eaten by other animals, their load of microplastics is now internalized by the consuming animals…who are often eaten by humans, which then contributes to our load.

What is still unknown is whether the microplastics inside most animals has any adverse health effects beyond the physical displacement effects. We just do not yet know whether there is any chemical toxicity resulting from all these tiny pieces of plastics being in us and in so many other animals.

2022 is the 50th anniversary of the Clean Water Act, and Avalonia is celebrating with a number of water-centered events. You can continue these celebrations by continuing to dispose of your trash responsibly (not out the car window, please), and recycling what you can…and more importantly, buying things made with recycled plastics (the whole recycling thing only works if there is a market for the things made from recycled plastic).  And thank you to everyone who was out cleaning up our roadsides!! Preston looks so much better because of you!