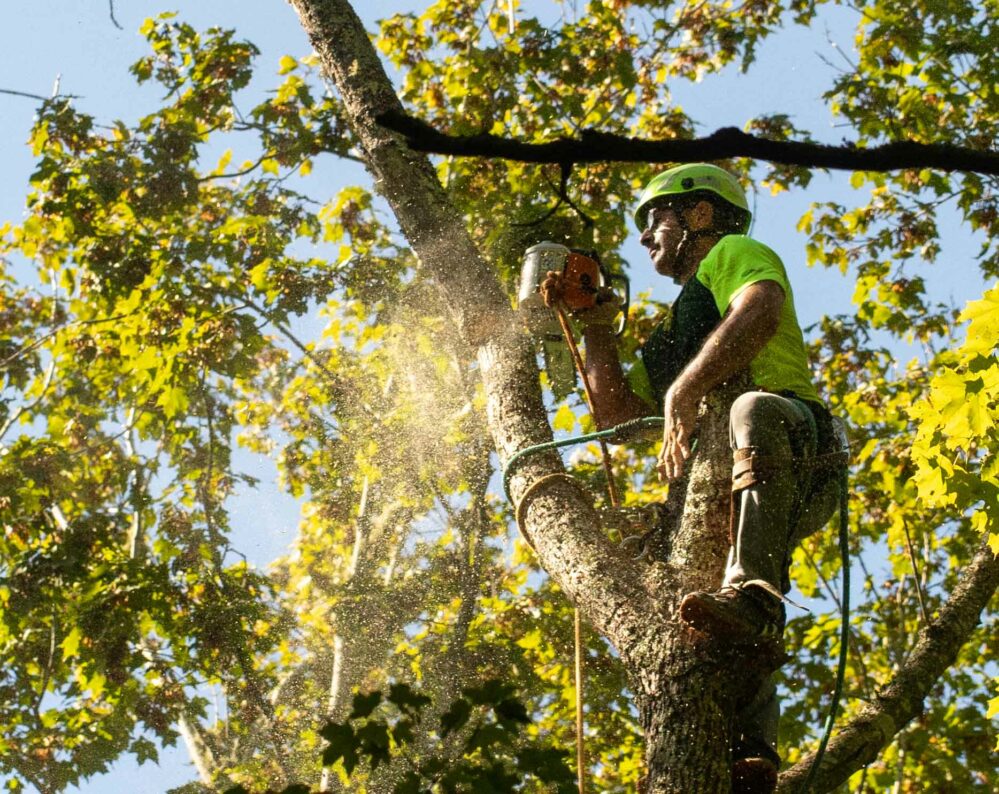 Andy Conway    On August 30th and October 18th, a small group of volunteers led by Andy Conway, until recently a professional arborist and tree climber, participated in two work parties to remove dead trees: the first from the parking lot of the TriTown Forest Preserve and the second from the foundation area of the historic homestead on that same Preserve. The tree in the parking lot was an 80-foot ash killed by the emerald ash borer. Andy used his considerable climbing skills to remove it from the top down. Twelve trees that had grown in and around the old foundation that were slowly destroying it were also removed. This work was accomplished by several stewardship volunteers over the course of a very full day. Andy has volunteered to donate significant additional high-end arborist work for Avalonia, including removing trees growing in and around the foundation at TTFP. He is a valued and skillful addition to our volunteer cohort. (FROM CARL TJERANDSEN)

Donna Siluk has made a terrific difference at the TriTown Forest Preserve. She is a neighbor of the preserve and a key partner in greatly reducing invasive species on over 500 acres, as well being an active participant in ongoing trail maintenance. Donna is a quick study and, as a yoga instructor, has remarkable strength and flexibility to pull out tough invasive species including winged euonymus, barberry and multiflora. Self-directed, Donna often works on her own, as evidenced by new large bags of invasives left for disposal. She is tireless, enthusiastic, great with visitors and loves the beautiful preserve. (FROM SUE SUTHERLAND)

Jim Friedlander has been a member of Stonington Town Committee for years. This past year he really stepped up and got involved in Avalonia’s major stewardship project at Hoffman Evergreen Preserve. He knows the Preserve well, and truly has the health and wellbeing of the forest at heart. He coordinated walks with the forester, reviewed maps, and helped get the contract and project approved by the BOD. Once the project got underway, Jim was reliably boots on the ground, connecting with the forester and the work being done. As we begin thinking toward the future, Jim will be a great asset in helping to coordinate trail work and our restoration efforts. The Hoffman forest has been given a new lease on life, and future generations of people and wildlife will enjoy it. Without Jim’s efforts and commitment, it would not have been accomplished. (FROM BETH SULLIVAN)

Joel Fuller    It’s said that 80 percent of life is showing up. In Joel Fuller’s case it’s more than that. He faithfully shows up at work parties on several preserves, helping to clear and maintain trails and supporting whatever work needs doing. In addition, Joel diligently maintains a trail of nesting boxes on the Preston Nature Preserve, which are increasingly important for breeding birds. Natural nest sites, holes in trees and old buildings disappear due to building repairs or manicuring gardens. Loss of these habitats can have devastating consequences for bird species which use the same nest site year after year. Despite significant health challenges, Joel shows up every time there’s a call for volunteers. His work is highly valued. (FROM BOB CHAPIN)