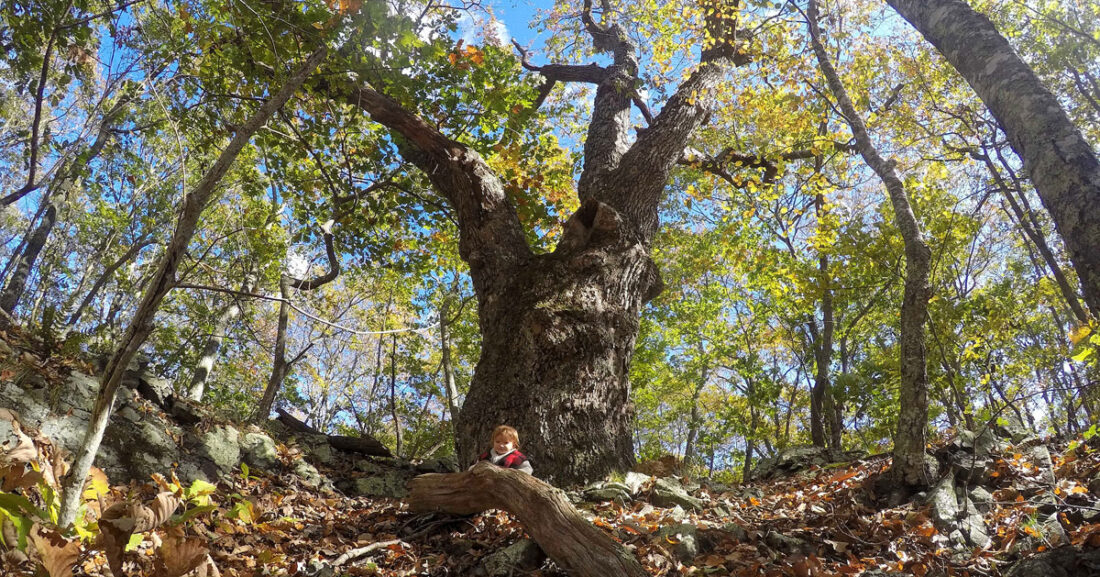 Avalonia Protected Forest
The 527-acre TriTown Preserve (TTFP) is located in North Stonington, Griswold and Preston amidst a large unfragmented forest made up of four parcels of land: the TriTown tract, the Boyd Family tract, Peltier’s Lost Pond tract, and the Linnea Richardson tract. TriTown’s large block of core forest and connected habitat is essential for some species. Habitat fragmentation – the breakdown of contiguous stretches of natural areas into smaller and smaller pieces by roads and developments – is one of the biggest ecological challenges of our time.

Surrounding Greenway
The TriTown Preserve is surrounded by heavily forested land held by the Nature Conservancy and the State of Connecticut’s Pachaug State Forest (the largest forest in the state forest system), which in turn abuts Rhode Island’s Arcadia State Forest. Greenways, strips of contiguous undeveloped land set aside for passive recreation and environmental protection, are important because of the role they play in protecting wildlife habitats, providing natural corridors for people and wildlife, improving water and air quality, serving as floodplains and environmental classrooms, and making our region more resilient in the face of climate change.

Waterways
The forest forms part of the Long Island Sound watershed and contains the headwaters of Miller Brook and Broad Brook. These brooks flow downstream into the Thames River Basin (in The Last Green Valley, a National Heritage Corridor) and beyond to the Sound.

Wetlands
The property contains many vernal pools and a 30-acre swampy fen area that connects to ten acres of wetland including a lost pond contained by two stone dams.

Magnificent chestnut oaks, among the largest in Connecticut, are found on the ridgeline’s rocky outcrops. Cedar and hemlock groves, dogwood, shagbark hickory, white oak, scarlet oak, red oak, yellow birch, American beech and many other species of trees also thrive on the property. An understory of low-bush blueberry, huckleberry, and numerous witch hazel and high-bush blueberry plants grow throughout the preserve.

People Love it, Too!
Popular attractions include hiking, running, skiing and snowshoeing, photography, the study of geology, an abandoned quarry on Rixtown, natural history, birding, pre-colonial and colonial-era history and archaeology.

History of the Land and People
The land features of this remarkably diverse terrain reveal the transformations of overlapping cycles of geologic time.

The smash-up of continental masses that began 400 million years ago reduced tenfold the land that was to become CT, buckling the existing bedrock and forming our north-south oriented rift valleys (linear shaped lowlands between highlands). The pulling-apart of the land masses that followed formed the Atlantic Ocean and deepened the rift valleys.

This break-up left part of a microcontinent named Avalonia attached to the east coast of North America; the other half underlies southwest Great Britain. Part of this seam or continental intersection (the Lake Char fault) runs along the east border of TTFP. Later volcanic activity at the fault created a dome of molten rock which pushed up the overlaying crust. The fractured softer crust gradually eroded, leaving a highly distinctive, more durable bedrock within the ridges and mountains in the preserve.

The last era of glaciation, which ended 17,000 years ago in Connecticut, deepened some lowlands, wore down highlands, deposited sediments, created glacial ponds, and left behind boulder-sized “erratics” dramatically perched along ridge lines in TTFP. The wetland area in the center of the preserve is a late-stage glacial pond gradually transforming to a bottomland forest.

As the ice from the last era of glaciation receded, the land was gradually populated by Native American peoples. Early sites in this area date from 11,000 BC, at which time the climate and forestation more closely resembled present day Labrador. Mastadon, giant beavers, saber tooth cats, and caribou moved across the landscape.

Do traces remain from the 12,000 years Native American peoples inhabited the land we now call TriTown? The experts disagree, but varieties of stone structures can be found throughout Tritown that closely resemble those found on lands inhabited by the Algonquin peoples from the Canadian Maritimes to Georgia. As such, TriTown’s Blue Trail is named “Wapayu” (pronounced wha PAI you), Pequot for “Feel the Wind,” in recognition of their long relationship with the land and the breeze one often feels upon reaching TriTown’s summits.

Most surviving walls at TTFP’s lower elevations are of colonial/post-colonial origin with a clear practical purpose. There is one major house foundation. Farmer-built walls contained livestock or were simply convenient sites to relocate the annoying field stones that emerged from their fields. Both farmers (for stone clearing) and Native Americans (probably as prayer offerings) made cairns – deliberately placed piles of stone. It is often difficult to sort out who did what. We respect and protect them all as part of our heritage and the history of this land.

After King Philip’s War in 1675-6, colonial settlement of inland southeastern Connecticut began in earnest. In 1703 James Rix bought a tract of land west of Billings Brook and within a few months sold off part of it to Ebenezer Lambert. The two mountains in our preserve are named for these families who settled and wrested a living from this unyielding land, which supported subsistence agriculture (primarily corn and sheep) as well as timber, charcoal and quarry production. After a period of steady growth, the environs of TTFP began to steadily lose population in the 1800s.

Early maps show that the road that runs along the southern boundary of TTFP was a major thoroughfare from central Rhode Island to Norwich and points west. One source refers to it as “The Old King’s Highway.” An inn situated close to our present parking lot hosted inter-colony travelers; a tavern across the road (now gone) is reported to have accommodated a distinguished party including Washington and Lafayette, who made a mid-day “nooning” stop there. Today, a portion of this old road is a segment of the west side of the Wapayu (Blue) Trail and referred to as “Coach Road” on the map. While on the trail, imagine an old coach and four horses coming over a rise in the late afternoon light struggling toward a restorative night’s stay at the inn.