Back to All Hike & Seek Properties

Nearly a square mile in area, TriTown Forest is Avalonia’s largest preserve, with 9 miles of managed trails. It is a very diverse property, featuring two mountain peaks, dramatic ridges, pine forests, a swamp, meadows, vernal pools, many brooks, and extensive maturing upland forest. Stone structures, some dating to the distant past, can be appreciated throughout.

Those unfamiliar with the preserve may find it larger, more remote or strenuous than they expected. We suggest carrying a smart phone to access the main map on line and referencing the many trail-side maps.

Additional to the clues below, see how many of the targets in the photo gallery, “Parade of Life”, you can find. Something to hunt for in every season.

Don’t forget to take photos of your finds and share on Instagram with #myavalonia or email to avaloniaphotos@gmail.com!

For the purpose of Hike and Seek, please refer to this map and follow the blue/lavender trail to look for targets on the blue loop. Look for yellow loop targets on the trail marked on map with black dots. 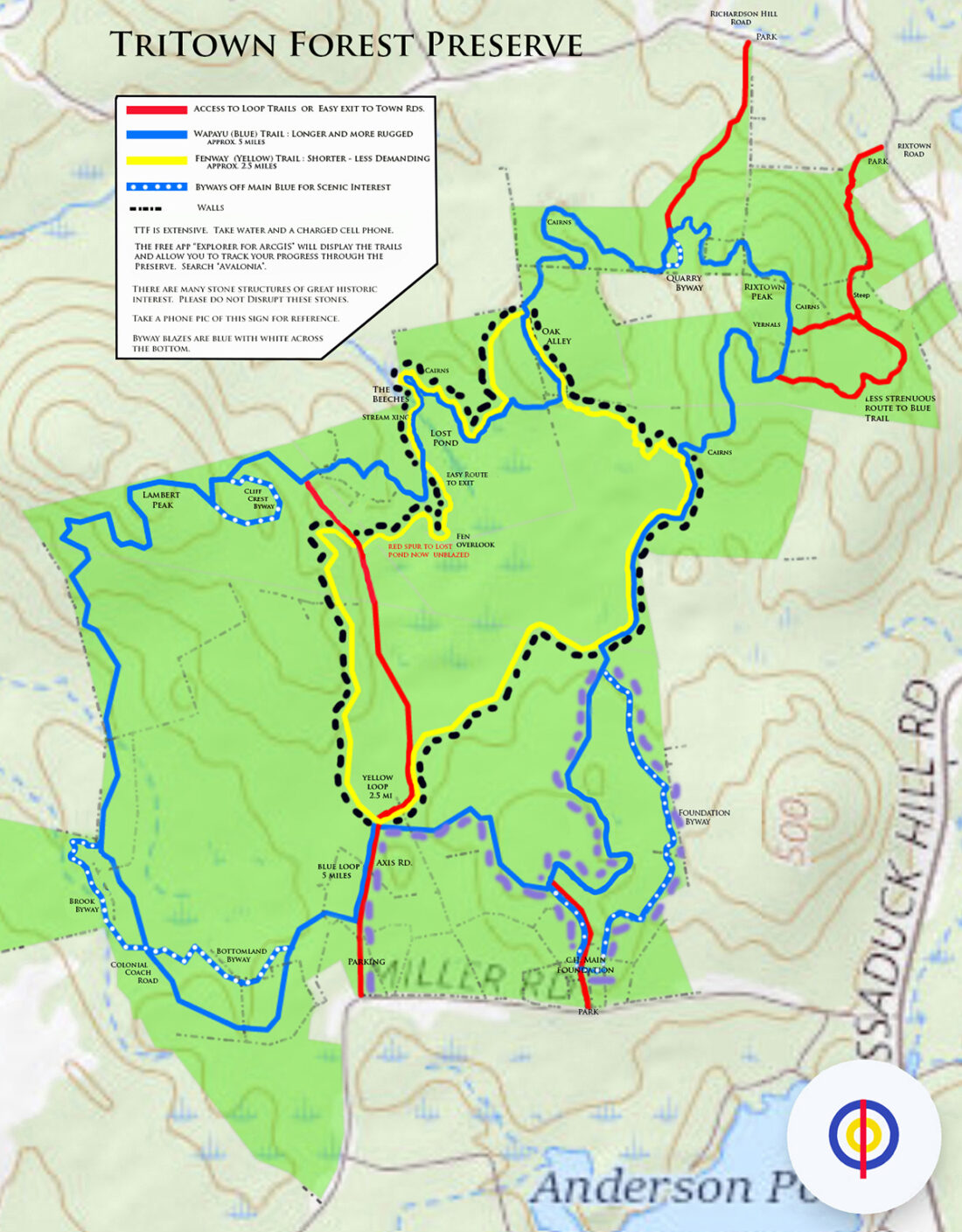 Have you ever stacked rocks at the beach? In this preserve, there are many stacks of various sized rocks called cairns. Look for one on a large boulder at the top of a hill. Why do you think they were built? Please do not remove or replace stones on cairns and walls. These structures have been here for many generations and we hope they will remain for many future generations  without change. Thank you. 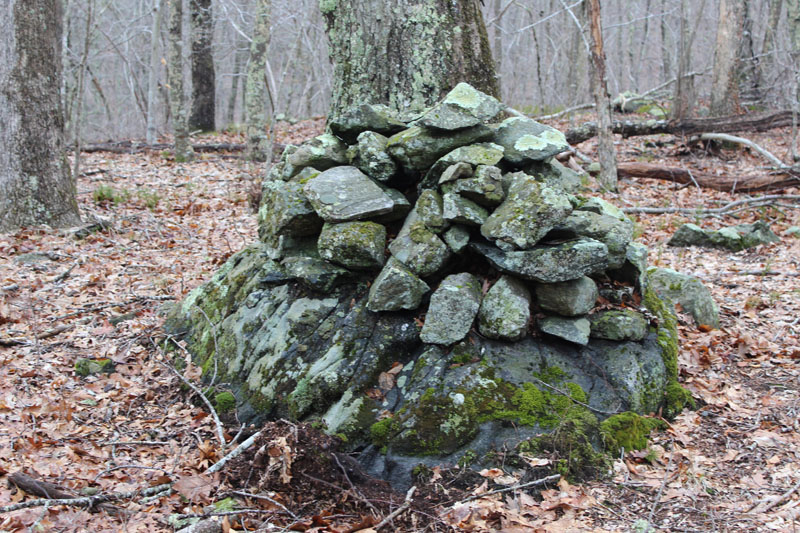 You can find many birch trees in this preserve, but this one is unique. It grew in a crack in a rock, splitting it apart as it grew bigger.  It has a sharp bend in its trunk. What do you think caused the bend? 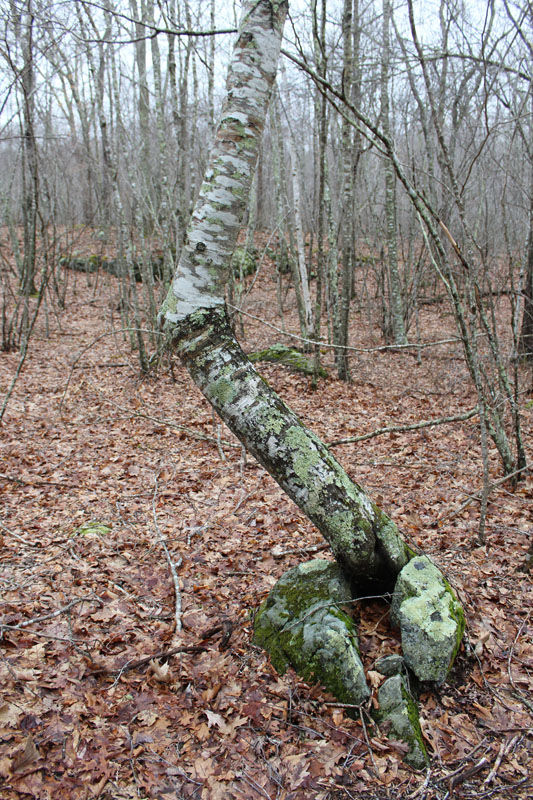 Many trees in this forest have holes in them because animals have carved them out in search of food or a place to make their nests. Once these trees die and fall to the ground, they become food and shelter for carpenter ants and many other small creatures. Gradually the wood decays with the help of good bacteria and fungi and is returned to the earth to enrich the soil for future trees. 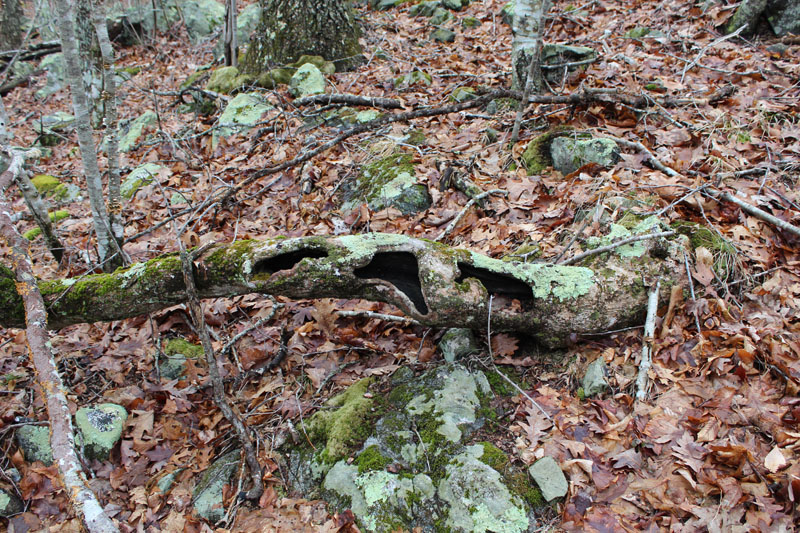 Everywhere you look you see rocks:  boulders, stonewalls, and cairns. These boulders were left behind by glaciers during the glacial retreat after the last ice age. Look for a hill with many boulders behind a stonewall. Use your imagination to see what kinds of shapes you can see in the rocks, like you might look for shapes in the clouds. 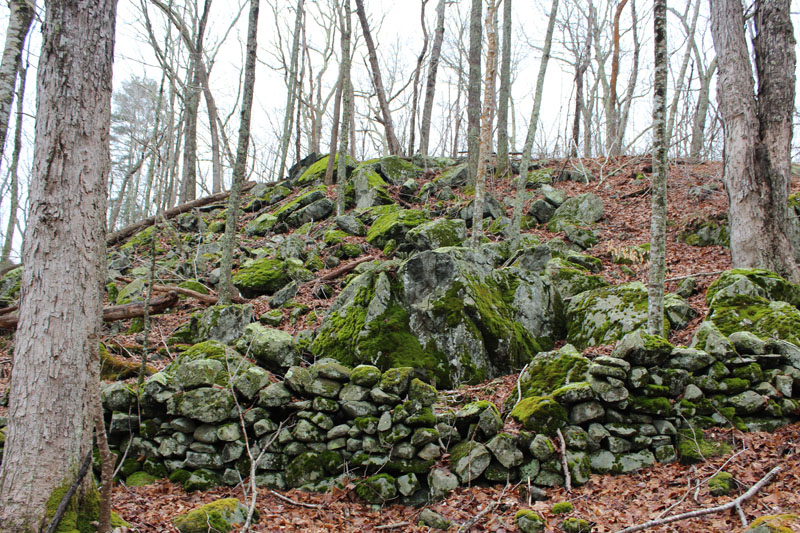 Why are there walls dividing the forest? Long before this forest had grown here, the land was used for agriculture. However, farming the land was hard because the soil was full of large rocks that made working the soil nearly impossible. The farmers dug out the rocks and placed them into walls that also marked their land boundaries and kept animals in or out of certain areas. 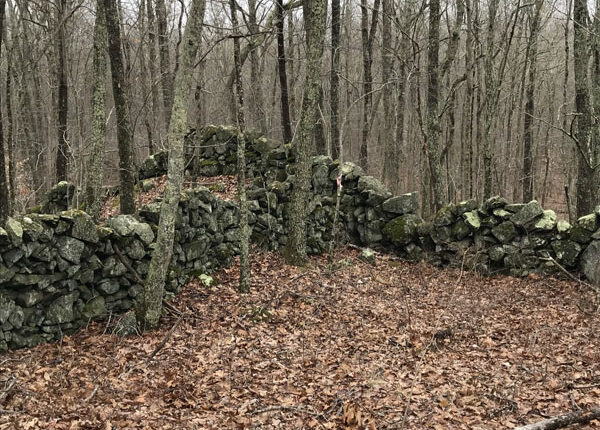 What’s that growing on the tree? These tan colored mushrooms grow onto the side of trees. Mushrooms and other fungi are decomposers, which means they help break down dead material. Decomposers are a very important part of ecosystems because they recycle nutrients from dead material back into the soil to be used again. 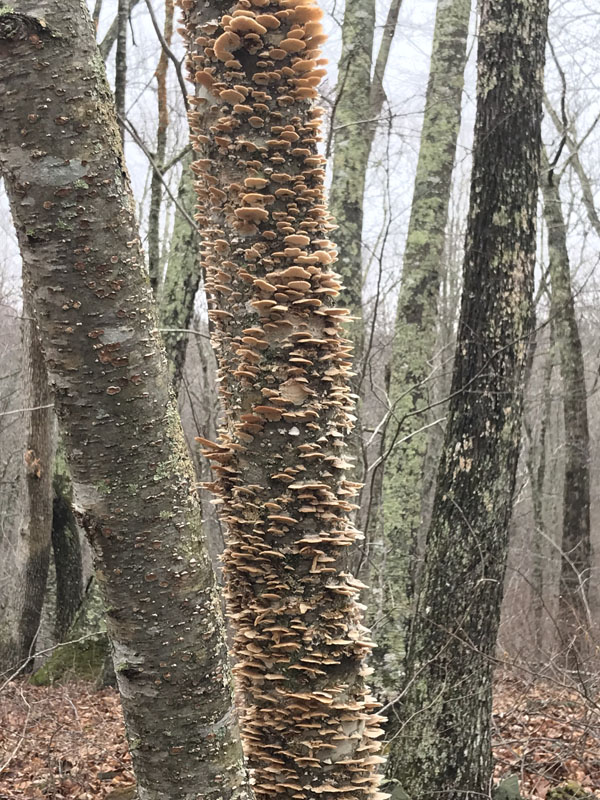 Do you ever get the feeling that someone is looking at you? At this preserve, there are many trees that are! While you’re hiking this preserve, look around for an eye-shaped pattern that appears on some trees. When you spot the eyes, you’ll have found a birch tree. 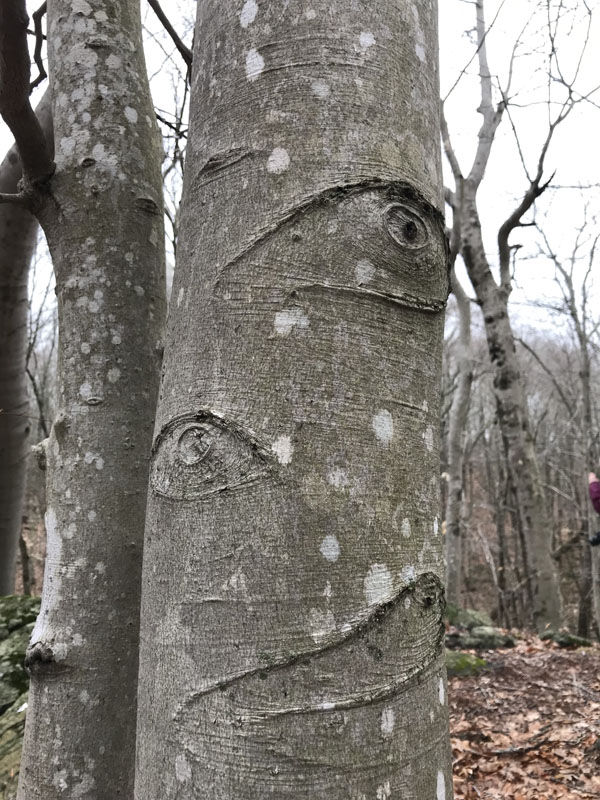 The land encompassed by this preserve spans throughout three towns: Preston, Griswold, and North Stonington. Although a metal sign is the last thing you’d expect to see on the forest floor, this small sign is the historic marker for the town line that separated Preston and Griswold. If you straddle it, you’ll be in two places at once! 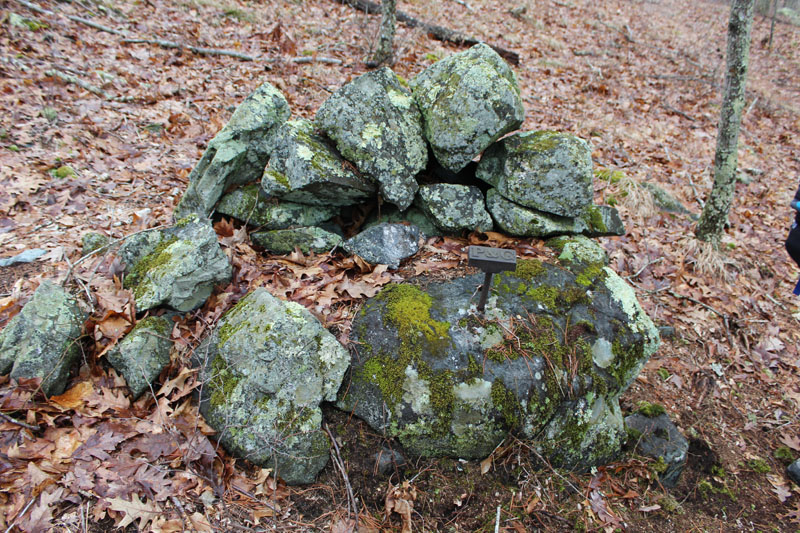 This kind of bridge is one you wouldn’t expect to find crossing a stream in a preserve. It is an old log bridge made with trees that were most likely cut down nearby. The logs of the trees are laid across the stream close together so that you can cross without getting wet! This kind of bridge is called “corduroy” because of the bumpy parallel lines. 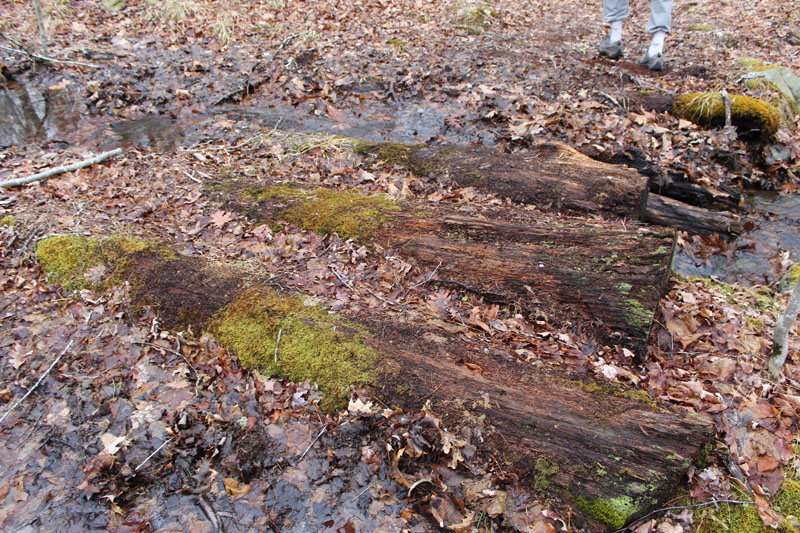 Vines growing up and into trees can be good or bad. Bittersweet like this one, can wrap around and hurt the tree. Grape vines are better because they do not twist the same way. The forest animals love the fruits and berries that grow on vines but sometimes the vines can be bad for the trees.  Can you think why? What might happen to the tree if the vine becomes weighed down with leaves and fruit or snow in winter? 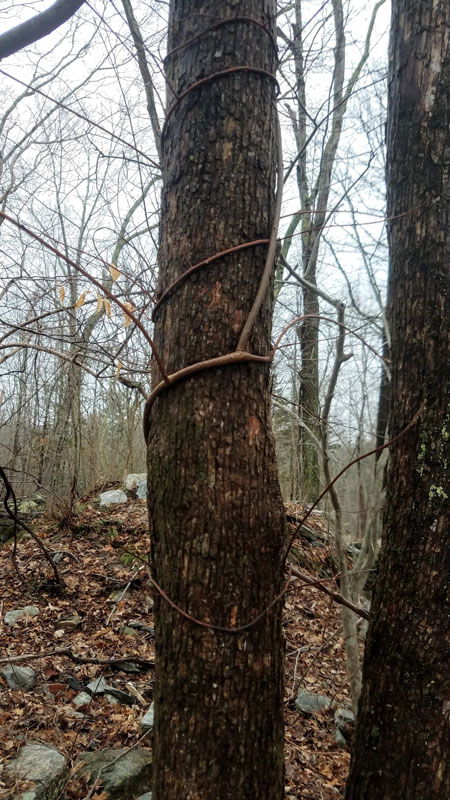 This funny plant is a moss (Polytrichum is this one’s real name)  Mosses are special plants that stay evergreen, all year long. They never have flowers or real seeds. There are a lot of different kinds all along the trail. Look at it closely, a magnifying glass would be great.  What do YOU see? Shooting stars or spikey hair? How does it feel? 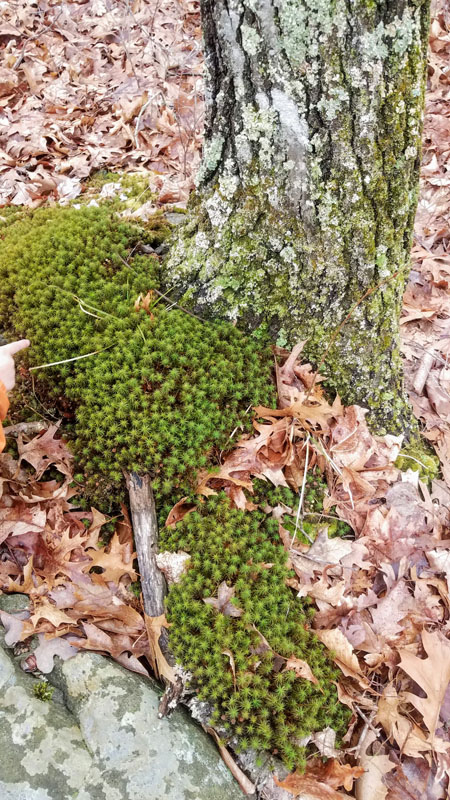 Can you think why these fungi might be called turkey tails?  Does the shape of the mushroom remind you of how a turkey fans out his tail?  They can be brown or yellow or orange and sometimes even purple. You can see them all year long. 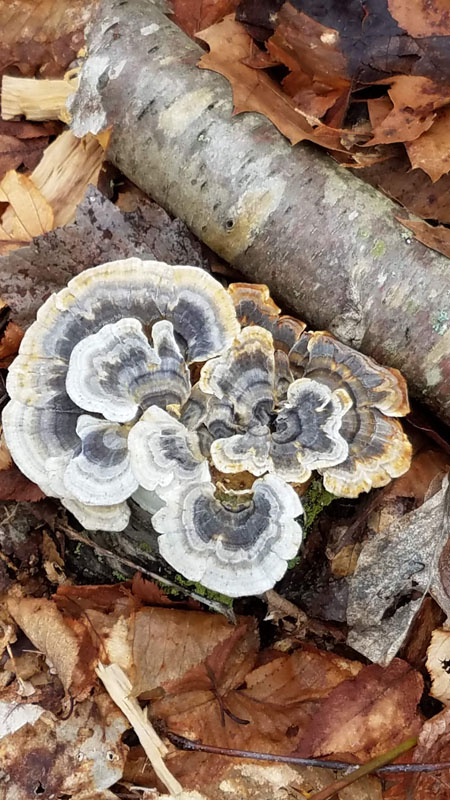 This has made a  blanket on the base of a tree and there are many such mounds all along the trail. The layer of moss provides a protective hiding place for small creatures at the base of the tree. Do you know what a pin-cushion is? Why might this moss be called pincushion moss? A fun fact is that often this moss is often located on the northern side of the trees which tends to be shadier, cooler, and damper. 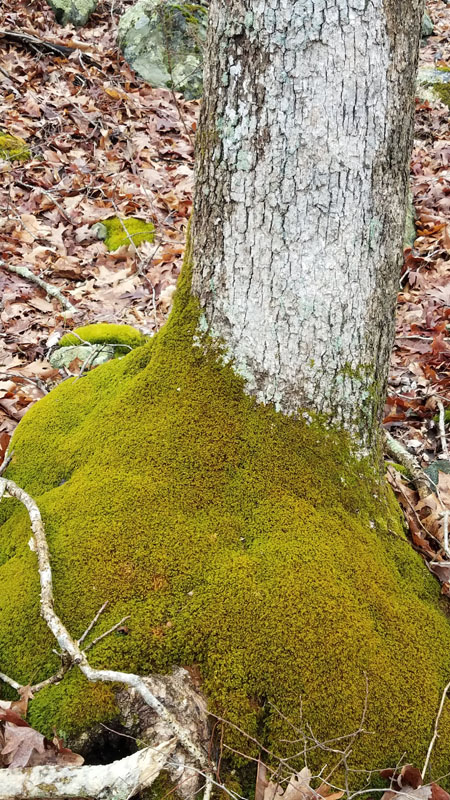 BUMP ON A TREE

This big lump on the tree is called a gall or a burl.  Galls happen all the time in trees when something like a bug, or a disease or injury causes the tree to grow wood in a bump around it. They can get fairly large and becomes what woodworkers call a burl with beautiful designs to be found inside when carved. They are perfectly normal however, and do the tree no harm. 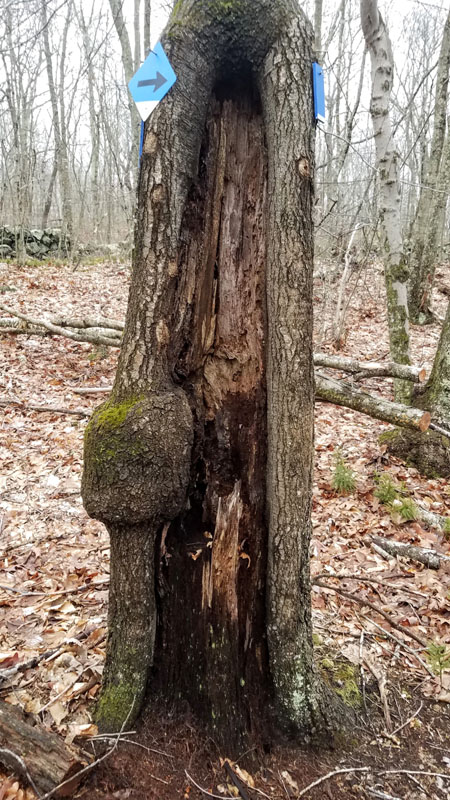 Lichens are quite unique and interesting organisms. They are a combination of Algae, which can make their own food, and Fungi, which are decomposers and cannot. They work together to survive as one, and they create unusual structures and patterns on rocks and trees. They can look like coral, antlers, or even an old man’s beard. 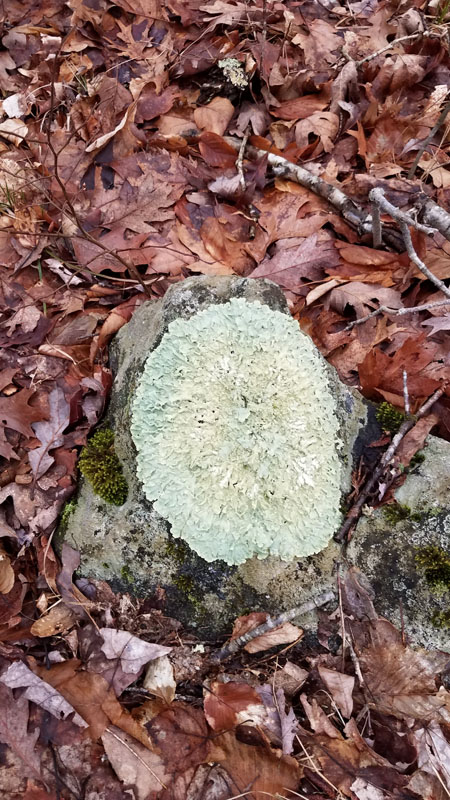 When you see bare wood on a tree, where the bark has been removed, you can tell a woodpecker has been at work. This one was a big one: maybe a pileated woodpecker.  Look at the jagged marks where its beak hammered away the bark while looking for bugs to eat. Sometimes you can find woodchips on the ground below. 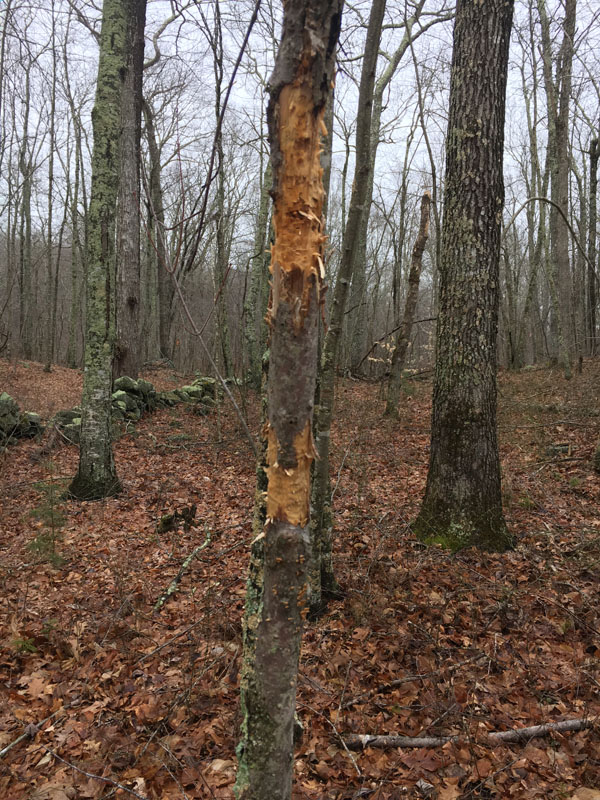 This swirly stump is located alongside the trail and looks like a cinnamon bun! Can you find it? How tall are you compared to the stump? If you find this special item take a picture with it and describe what you think it looks like!  Over time, this part of the stump will rot away too. 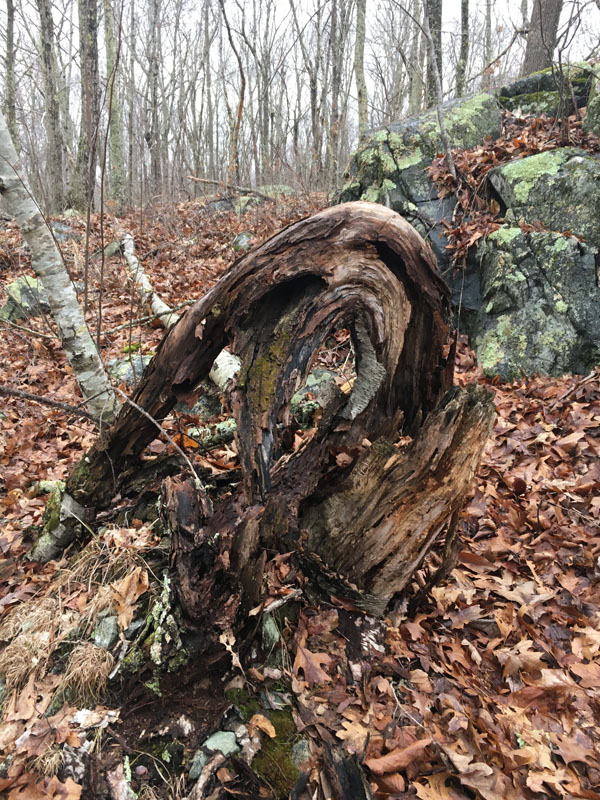 If you see trees like this that are missing their center the tree might have once been struck by lightning. If struck, the tree is injured, but it will continue to grow living tissue around the injury, like a tree healing and having a scar. The tree can remain alive even if it is hollow on the inside.  How do you think animals can use the tree’s hollow space? 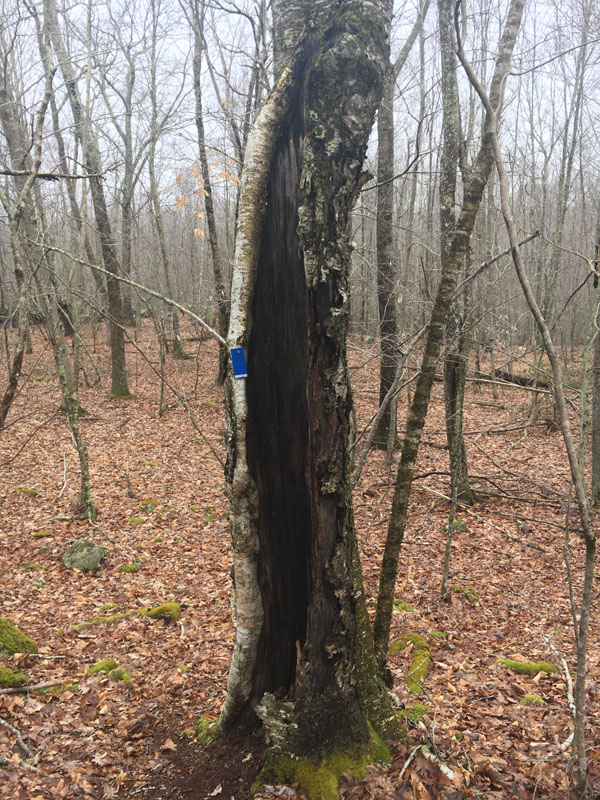 This evergreen plant is often hidden in the leaves on the ground, so look for it carefully. Its leaves are marked with a design that looks like the pattern of snake scales. It is actually a native orchid. Do you know what an orchid is? In the summer you might see a tall stalk of pretty, small white flowers. 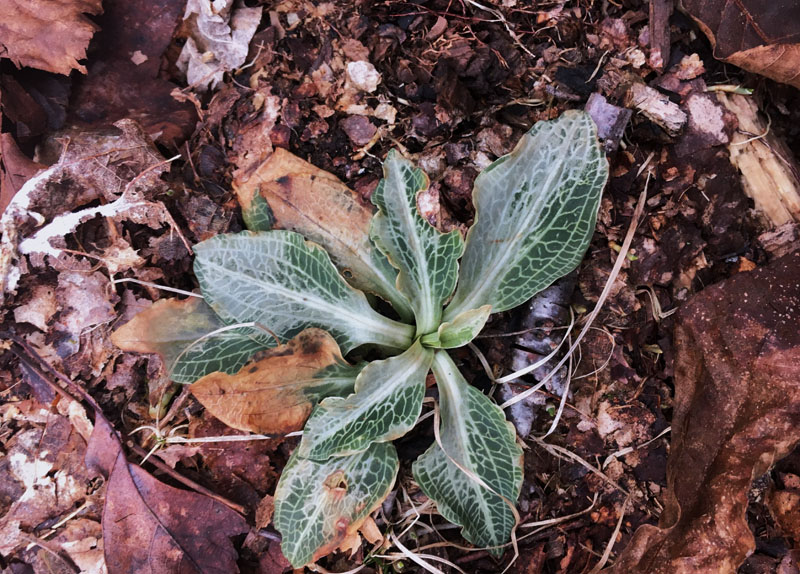 Back to All Hike & Seek Properties