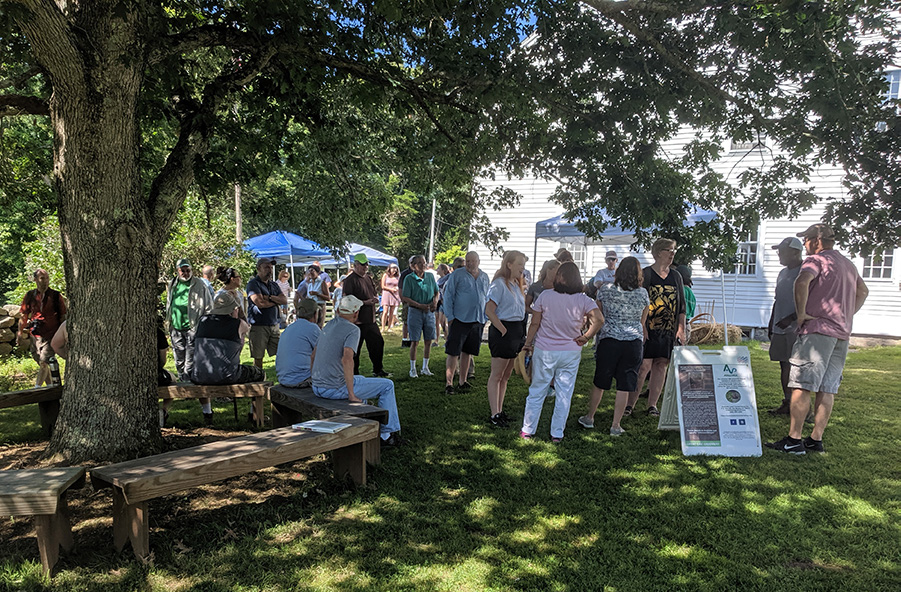 On July 13th, a beautiful day, more than 50 residents, local officials and state – representatives joined the Connecticut Land Conservation Council (CLCC) and the Avalonia Land Conservancy for a hike to a discussion of conservation funding.

Amy Paterson, Executive Director of CLCC, hosted the gathering—one of five similar events across the state—all well attended. She spoke of CLCC’s role in advocating for land conservation in Hartford and the importance of local partnerships to protecting high-value conservation land.

State Sen. Cathy Osten’s remarks focused on the need for constituents to reach out to their elected officials, not just once, but “keep at it.” She warned that the Community Investment Act (CIA) came under attack during the last legislative session because legislators hoped to divert money from the CIA’s large fund, set up outside the state budget deliberately to protect it from the normal budget process. By making it a budgetary item, funds could be raided for other uses. CIA funds, accrued from a $40 recording fee collected on every real-estate transaction in the state, are distributed to town clerks and administered by state agencies. CIA funds are crucial to the viability of the Open Space and Watershed Land Acquisition Program.

Representatives Christine Conley and Kate Rotella each reiterated how conservation projects like Atkinson-Dirlam and the Great Oak Greenway are beneficial to communities by providing places for active recreation and the quiet enjoyment of the natural world. Frederick B. Allyn, III Mayor of Ledyard, spoke of the partnerships his town had made with Avalonia. He told how the town contributed $60,000 toward four preserves, including Atkinson Dirlam project and gained 672 acres of conserved land through Avalonia’s ownership and concluded, “That’s a good deal!” He introduced a number of town officials, including town councilors Bill Saums, Tony Sabilia, Michael Washington and Tom Malone. Town Planner Liz Burdick attended, as did Conservation Commissioners Hillary Evans, Mike Marrelli, and Julie DuPont-Woody. Nate Woody was introduced, Chair of Planning and Zoning, who also lead one of the two hiking groups.

Avalonia and CLCC would like to extend a special thank you to the Ledyard Historical Commission who opened the Nathan Lester House and Tool Museum for the event.